A member of the moderate New Democrat Caucus and Marine Corps veteran, Seth started Serve America, an effort to get more service-driven leaders elected to Congress, and ran a short-lived bid for the presidency in 2019. 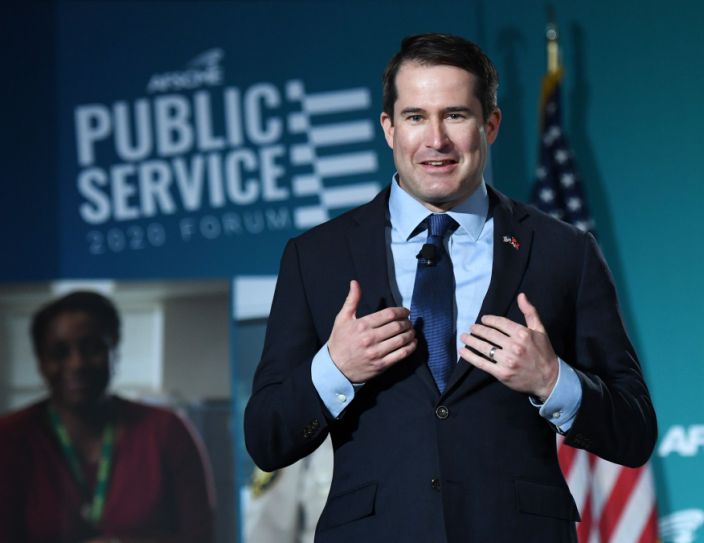 A member of the moderate New Democrat Caucus and Marine Corps veteran, Seth started Serve America, an effort to get more service-driven leaders elected to Congress, and ran a short-lived bid for the presidency in 2019. In 2021, Seth made headlines when he flew into Afghanistan during the chaotic withdrawal of American troops, drawing both praise and criticism.

Seth served four tours of duty in Iraq, during one of which he co-hosted a television program with his Iraqi interpreter discussing regional conditions for an audience of U.S. service members and Iraqi citizens. After then earning a dual business and public policy degree from Harvard, Seth worked briefly in the private sector before running for Congress.

Sounding the alarm about the safety of our democracy has become a talking point on the left and a mocking point on the right. Except Seth is breaking it down by the numbers, pointing out in a tweet that there’s been over 440 bills introduced in 49 states that are intended to hijack elections and suppress votes. Seth goes further by saying that these state legislatures are trying to finish what the violent mob started on Jan 6. Indeed, democracy is at stake.

Seth served four tours of duty in Iraq, which likely influenced him in his focus on Afghanistan this year. After the United States completed their withdrawal of troops in Afghanistan in August, Seth responded to President Biden’s claim that Afghans did not want to leave, saying it was “utter BS.” In a major move, Seth flew to Kabul in a secret mission with fellow PP leader Rep. Peter Meijer. This had people talking so, mission accomplished? In addition, Seth introduced and successfully passed the WELCOME Act, which provides Afghan refugees with the same benefits other refugees receive.

Seth took a little weekend vacay to Ukraine to meet with local and U.S. officials to discuss a response to a possible invasion from Russia. Seth has a three step proposal for President Biden. First, finalizing a sanctions package before Russia potentially sends 100,000 troops to the Ukrainian border. Second, the U.S. should speed up the transfer of lethal weapons to Ukraine like anti-tank missile systems. Third, somehow reaching the Russian public with messages about the larger consequences to Russia if this were to happen. Have you been following this international issue?

“We should all be able to agree that the world would be safer if we get rid of nuclear weapons,” Seth wrote in a recent article he published in The Hill. As Biden heads into a meeting on nuclear policy this month, Seth wanted to make his position clear – that the U.S. should push for diplomatic agreements with other nuclear weapons holders like China, North Korea, Russia, and Iran, but it should NOT declare a ‘no first use’ doctrine. A ‘no first use’ doctrine would be a pledge from America to only use nuclear weapons in response to a nuclear attack – not as the aggressor. But, Seth argues (perhaps in conflict with many in his party) that doing so weakens the U.S. position worldwide. Do you agree with him?

The G.I. Bill, when signed into law in 1944, was theoretically supposed to reward all those who served and sacrificed with the opportunity to attend college. In practice, however, this excluded many Black veterans of World War II. Seventy-seven years later, Seth and Majority Whip Clyburn have introduced a bill that attempts to finally make good on that promise. The G.I. Bill Restoration Act, which has companion legislation in the Senate, would provide families of Black WWII Veterans with a transferable benefit that their descendants would be able use to attend college, secure housing, start businesses and build generational wealth. Seth has always been looking out for our veterans and this is yet another way to make good on a debt we as a country owe to them.