The first openly bisexual person in the U.S. Senate and first female Senator from Arizona who rose to prominence for her advocacy for LGBT rights. Kyrsten has also completed an Ironman triathlon and summited Mt. Kilimanjaro. 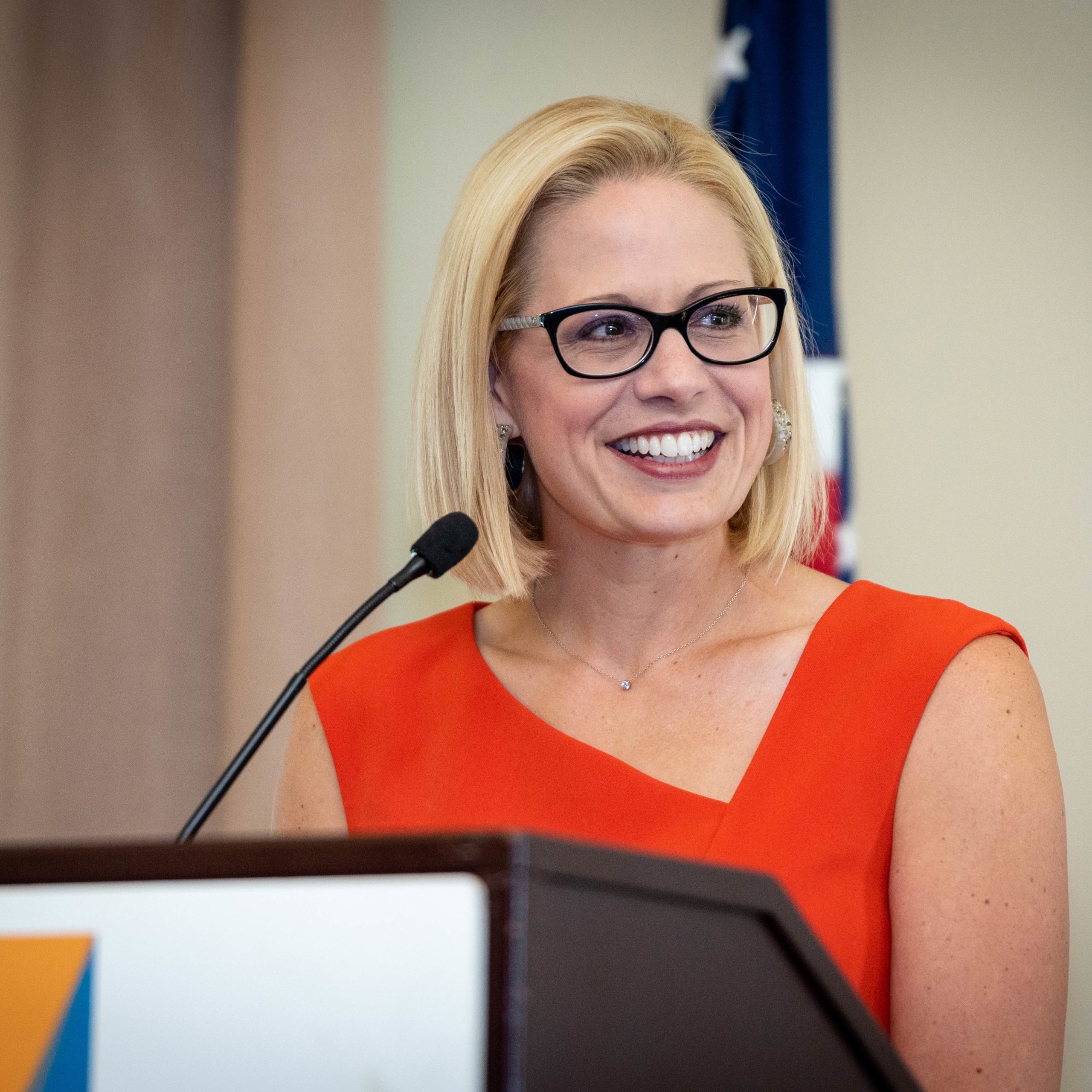 The first openly bisexual person in the U.S. Senate and first female Senator from Arizona who rose to prominence for her advocacy for LGBT rights. Kyrsten has also completed an Ironman triathlon and summited Mt. Kilimanjaro. Kyrsten became a love-her-or-hate-her household name in 2021 due to her important role in passing Democrats’ infrastructure proposals.

A former social worker, Kyrsten finished law school and became a criminal defense attorney and adjunct professor, teaching policy and grant-writing. She was elected to the Arizona House of Representatives, where she was one of the most conservative Democrats, before being elected to the Arizona State Senate, and then the U.S. House of Representatives.

As a former social worker, Kyrsten finished law school and became a criminal defense attorney and adjunct professor, teaching policy and grant-writing. Kyrsten was elected to the U.S. Senate in 2018 and made national news in 2021 due to her important role in passing Democrats’ “bipartisan” infrastructure proposals. Kyrsten has had a busy start to 2022 as she also played a major role in preventing the passage of the voting rights bill, affirming her position as the “love her or hate her” household name.

The Lady and the Infrastructure

Kyrsten made her passion for physical infrastructure known when she helped broker the bipartisan infrastructure bill that was signed into law late last year. Now, she’s doing her victory lap, applauding the Dept. of Transportation’s decision to give $25 million to AZ highway repairs and visiting a Light Rail extension project that will benefit from a historic investment in public transit. Take a moment to picture Kyrsten, cozying up by a fire with a subway car and a bridge. Isn’t it romantic?

The Gentleman from West Virginia ain’t the only headline grabber in DC. Kyrsten made clear two things this week: she’s still very much against scrapping the filibuster, and she needs top moderate billing along with the guy on the houseboat. Democrats are now considering rushing a year-end vote on Voting Rights instead of the Build Back Better bill. Kyrsten made clear that she supports voting rights legislation, particularly the one drawn up by Manchin, but not at the expense of doing away with the filibuster. Moderate Dems are trying to court her on a similar strategy just implemented on the debt ceiling issue, whereby they keep the filibuster intact but require an in person filibuster for just this one piece of legislation. Like all things Kyrsten, we’ll just have to wait and see!

On Her Way Up?

We might not know until election time, but Kyrsten has reason to celebrate after the passage of the bipartisan infrastructure package. Afterwards she was interviewed (which she rarely does) and said “Keep telling me what you think. I appreciate it.” Like a good politician state farm is there… but in all seriousness she focused on turning her attention to making sure the implementation is carried out correctly. She led a roundtable discussion with Transportation Secretary Buttigieg and AZ Senator Mark Kelly saying, “Our historic legislation strengthens Arizona’s—and America’s—competitiveness by making significant investments to modernize and bolster our infrastructure, helping fix our supply chain challenges and create jobs across Arizona.” Two gold stars for Kyrsten.