Who are they? A Navy veteran and father of three girls, Jim created the Rising Hoosier Awards during his time in Congress to award exemplary Good Samaritans in Indiana high schools. Pre-Congress? Jim took a leave of absence from his position as an Indiana State Senator to deploy to Afghanistan… 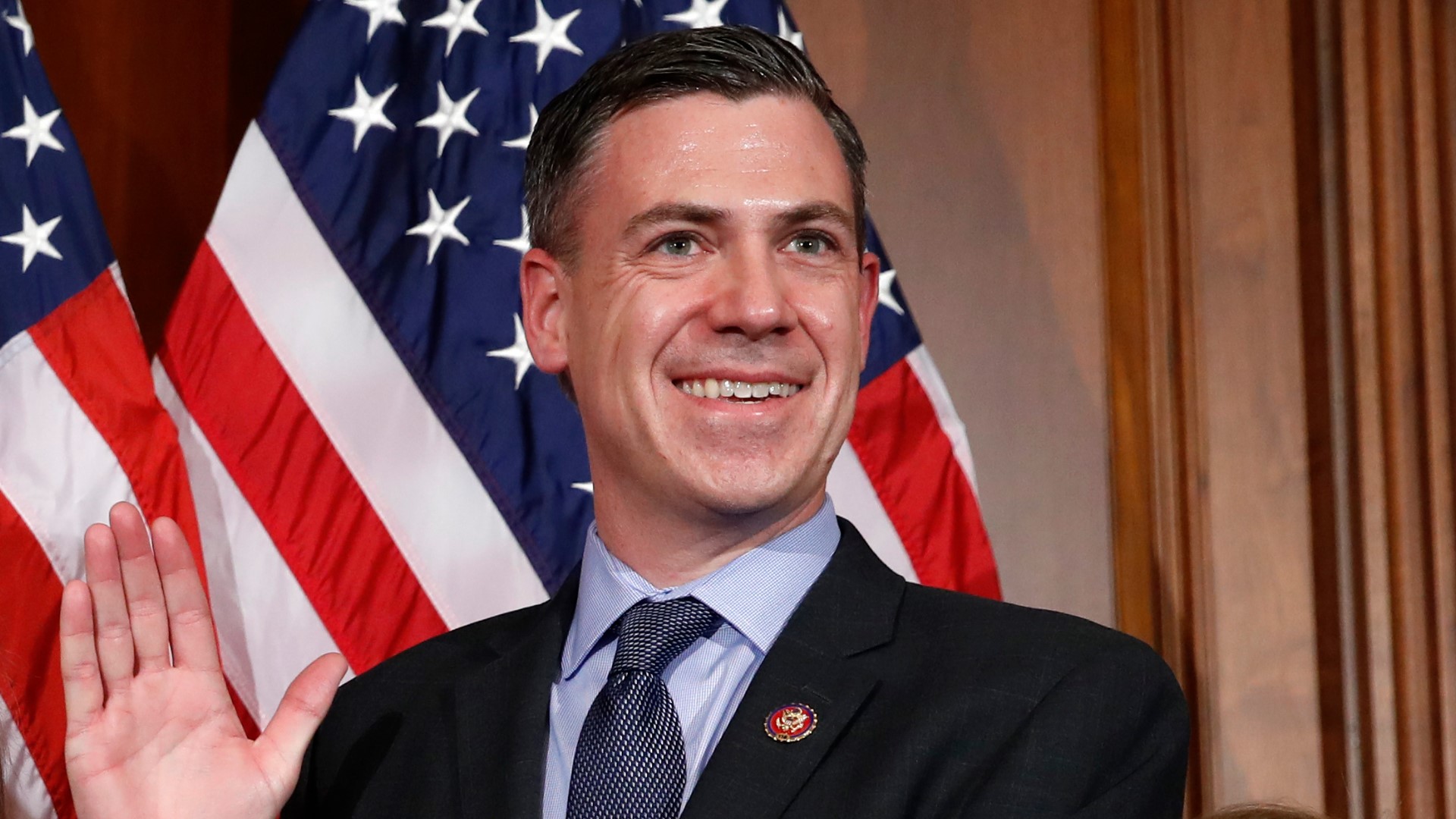 A Navy veteran and father of three girls, Jim created the Rising Hoosier Awards during his time in Congress to award exemplary Good Samaritans in Indiana high schools.

Jim took a leave of absence from his position as an Indiana State Senator to deploy to Afghanistan in 2014 and 2015. He is still an officer in the U.S. Navy Reserve and Supply Corps.

The Great Pilgrimage To Jersey

Jim’s influence and stature within the GOP seem to be ever growing thanks to his role as the Republican Study Chair, and so it seems almost a prerequisite that he and a dozen colleagues made the trek to Bedminister for an evening sit-down with former President Trump. The two hour conversation focused on a variety of topics relating to both policy and election strategy for the upcoming 2022 midterms as well as the 2024 presidential. Jim stressed that he believes “we win back the majority if we focus on the Trump agenda.” The Republican Study Committee helps shape the forthcoming policy and legislative agenda goals, and whether or not the former President still has an iron grip on the party, his agenda remains precisely where they’re going.

Did You Get the Memo?

As Republicans plot their path to take over the House, Jim, as head of the Republican Study Committee, has sent out a memo to Republicans to tie Biden’s agenda to inflation. The memo says to frame inflation as “Democrats’ hidden tax on the Middle Class” and provides a series of talking points. Notably, the memo also references Larry Summers, Clinton’s Treasury Secretary, who warned in an op-ed that Biden’s stimulus package could “set off inflationary pressures of a kind we have not seen in a generation.” So, do you think this tactic is going to build the Republican support Jim and his cohort need in 2022?

All the Way to the Banks

We spoke about this in our last Happy Hour – Jim Banks was hoping to angle for Liz Cheney’s spot, but unfortunately for him it went to PP Leader Elise Stefanik. The story behind how Jim was perhaps the next young Republican for the job is based on his ability to run the Republican Study Committee, which is the largest GOP caucus and promotes conservative policies in the House. Since becoming chair, Jim has become a “rival messaging machine” crafting memos, coordinating media opportunities for other members and compiling talking points, which is primarily what Liz Cheney’s former job did, communication and member services. Well despite not becoming the current GOP Chairman, Jim definitely has his eyes on something bigger!

Jim has not been shy in hiding what Politico calls his “naked ambition” for the number three GOP job in the House, currently held by the embattled and outspoken Liz Cheney. Jim, a Trump loyalist, has earned praise from Leader McCarthy for his role as the Chair of the Republican Study Committee. Jim says his committee is “providing a [messaging and policy] framework better than anyone else on Capitol Hill.” Tensions between Jim and Cheney have remained at a steady boil until recently as Jim has stepped up his calls for taking a different path forward, in order to win elections and get the growth of the party back on track. Another rising star in contention to replace Cheney is fellow under-45er Elise Stefanik, so even if Jim doesn’t get the nod out of the bullpen this Congress, rest assured, he will in due time.

What’s it like to be the leader of the most influential group of conservatives in the House? Just ask Jim. He’s the chair of the Republican Study Caucus, which is a large group of conservatives who, until recently, had been flying under the radar and focusing on policy. Now, as possible 2024 GOP candidates for president emerge (omg, alreadyyyy?) Jim and his RSC are the first stop on the campaign trail. The caucus has had visits from Nikki Haley, Chris Christie, Tom Cotton, and more, during which these hopefuls share policy ideas, discuss strategy, and get the caucus’s reaction to campaign ideas. As for Jim, he’s intent on keeping Trump’s ideology front and center regardless of which one of the political suitors ends up on top.

A gift?!! For Me? Jim wrote a letter to House Minority leader Kevin McCarthy speaking of the “gift” the Republican party has received from former President Trump. Despite what other Republicans have said, Jim feels that the GOP must become the Party of the Working Class and embrace Trump’s populist rhetoric. Over the last 10 years, the GOP has dominated occupational groups like mechanics, truckers, and plumbers while donations for Democrats mainly come from teachers, lawyers, and engineers. The document is titled Cementing GOP as the Working-Class Party… which basically shows that the Republicans will most likely be doubling down on President Trump for the foreseeable future, at least if Jim has anything to say about it.

Whose Fault Is It, Anyway?

Many GOP lawmakers are vehemently condemning the Biden administration’s handling of what they see as an alarming crisis at our southern border, and Jim has gone one step further in saying this is “100% Biden’s fault, and everyone knows it.” He went on to lay the migration surge blame on the administration’s “promise of free healthcare and stimulus $” as well as the halting of border wall construction. According to an article Jim linked in his tweet, there are roughly 15,000 unaccompanied migrant children currently in U.S. custody, and well exceeding the 72-hour legal detainment limit. It’s hard to objectively confirm Jim is right in who’s to blame, but he’s most definitely right in saying this is now the Biden Administration’s problem.

Jim spoke at the CPAC conference in Florida and turned quite a few heads in the national news media. He sees the future of the party with the “ex-President still ruling the GOP,” but Jim has also been a strong supporter and early endorser of former VP Mike Pence, who’s begun laying the groundwork for a possible 2024 run. So it’s clear Jim recognizes the mounting opposing forces taking shape in the GOP. Additionally, Politico’s recent profile of him alluded to his challenging Liz Cheney for the House GOP Conference Chair position so it seems nothing is off the table.

Relations between the US and China are at an all-time low and a group of Republican lawmakers are starting to push the Biden administration to stay tough on China. Many Republicans have already said President Biden’s policies on China are “bad policies, bad personnel.” Jim is head of the Republican Study Committee which introduced 5 bills to counter the Chinese Communist Party. The list discusses restricting Chinese companies from buying American companies, banning downloading software from China, restricting national security professionals from working for certain foreign governments, and foreign espionage. China was a hot issue last session. Do you think our relationship with China will get better or worse?

Not So Deep Pockets

The Republican Study Caucus is the largest conservative caucus in the House and Jim is now the head of it. In a recent video, he pointed to the caucus’s mission of making fiscal responsibility a hallmark of the GOP going forward – slamming Biden’s proposed spending package to address Covid and economic recovery. The drama of pushing this bill through Congress with what will probably be very little to no Republican support is not lost on Jim. He invoked comments by former Obama economic advisor, Larry Summers, that the bill will “devalue the dollar and send the economy into a tailspin”. As much speculation about the future agenda of the GOP swirls around the country, Jim is committed to making wasteful spending one of the top priorities.